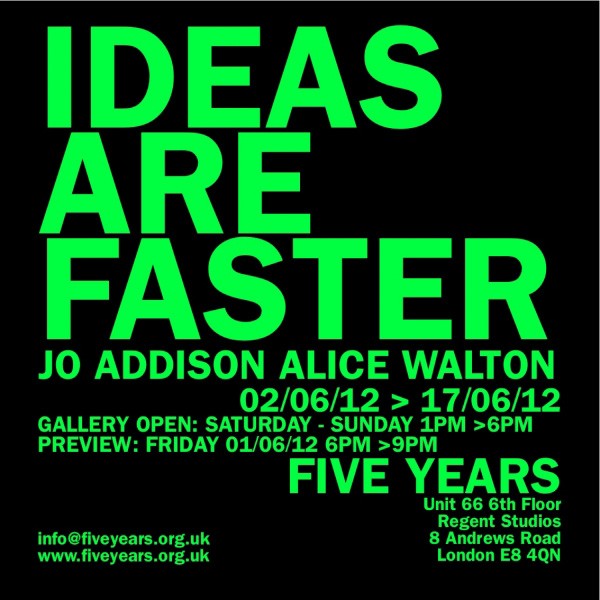 Talking of the speed and mass dissemination of art through books in the late 1960s, Seth Siegelaub described ideas as being ‘faster than tedious objects’. Here, by contrast, Jo Addison and Alice Walton present unashamedly slow, obtuse objects.

Addison interprets mundane objects and images with loose figuration and a deliberately provisional approach to materials. Things are depicted by implication and reduction, rather than by detailed description.

‘Does Jo Addison’s work allude to objects or restage what essentially an object is – a thing? What kind of encounter is staged? What are we actually looking at, or wanting to hold or touch? We encounter them as objects by of way of their ‘thingliness’. What is this thing state? Are we on unfamiliar registers?’

Walton’s sculptural objects are configured to support and re-present collections of found images. Constructed from everyday materials such as cardboard, Polystyrene or plasterboard, the elements are simply assembled with the method of production left clearly visible.

‘There is a surface that you can’t see through, laid over with a cut surface you can see into. A mirror not reflecting back, but drawing in. It is active in transforming – just as the opacity is active in muting, ignoring. And there is an underneath. These surfaces play with our activity of looking’.